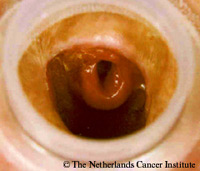 Problem: there are signs of local infection (redness, tenderness, granulation), the prosthesis is displaced (drawn inwards or pushed outwards), and the voice is sub-optimal In most cases of infection around the prosthesis, granulation formation and/or edema will occur to the extent that the fistula tract becomes longer. As a result, the prosthesis may be drawn inwards and disappear under the tracheal mucosa, or conversely, the prosthesis may be pushed forward out of the fistula tract due to overgrowth of the mucosa on the esophageal side of the TE-fistula. This last phenomenon is the most common course of events in case of infection and is schematically shown in the animation and the figure to the left.

Such an infection is noticed by the patient because of a slight increased effort in voicing. The figure shows an example of such a case of excess tissue formation on the esophageal side, which prolapsed slightly after removal of the prosthesis. A speudodiverticulum is the result, which should not be considered as a separation of the party wall, as often is assumed. Temporary replacement of the prosthesis with a longer version is then advisable. Treatment with broad-spectrum antibiotics with or without corticosteroids is often adequate to control this infection. If the infection is not cured by this treatment with the prosthesis in situ, the prosthesis should be removed and further healing should be awaited. If by this process the fistula tract closes spontaneously, secondary re-puncture for insertion of a new prosthesis may be required (see chapter Surgical procedures).

Reminder: a "too long" prosthesis with an increased effort in voicing might be a "too short" prosthesis.