Issue: does the immediate insertion of a Provox voice prosthesis during primary or secondary TEP lead to replacement of many prostheses for leakage around the device

The gradual subsiding of the surgical edema and tissue reactions, which eventually leads to a decreased length of the TE fistula tract, is a process that in most patients takes many months. This means that in most patients leakage through the device is still the main indication to replace the first voice prosthesis. This can be deducted from the survival/device-life curve (see graph below), which shows the fate of 246 Provox voice prostheses inserted during primary TEP at the time of laryngectomy (an immediate postoperative picture is shown to the right). This survival/device-life curve is based on our data, published by Op de Coul et al. 1999. As can be seen, the vast majority of prostheses are replaced for leakage through the prosthesis, while replacement for leakage around is much less frequently needed. In case of leakage around, a ring placement posterior to the tracheal flange can be used to stop leakage. Interestingly enough, the median device life of the first prosthesis is clearly longer than that of the following devices in this series (135 versus 89 days). 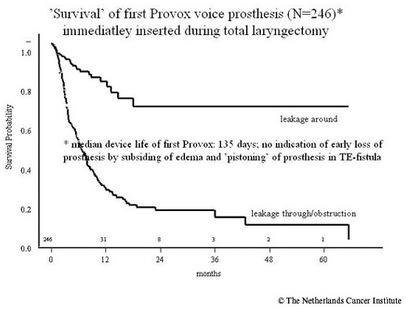