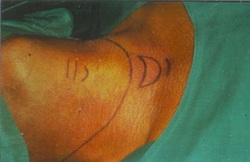 Primary prosthetic vocal rehabilitation with immediate insertion of the voice prosthesis during total laryngectomy is presently our method of choice. A rule of thumb can be, that if a patient is fit enough to be submitted to this surgical procedure, he/she is fit enough for a simultaneous prosthetic voice restoration procedure. There are no obvious contraindications against this policy, except in case the tissues are in a ‘too poor condition’, such as after exceptional high doses of radiotherapy, i.e. exceeding 70 Gy in 7 weeks, or equivalent doses.

Optimal results of voice rehabilitation with an indwelling Provox voice prosthesis can only be obtained if the technique of total laryngectomy fulfills certain requirements. Besides keeping in mind the standard oncology principles, care should be taken to create a pharynx, which is wide and ‘flexible’ enough to enable effortless speech, without hypertonicity of the constrictor pharyngeus muscles. Furthermore, the tracheostoma should be wide enough for comfortable breathing and narrow enough to be easily occluded by the patient when speaking, although the latter is less important with the availability of the Provox HME.

In the Netherlands Cancer Institute a standard wide field total laryngectomy is carried out with 24 hours peri-operative antibiotic prophylaxis (e.g. gentamicin and clindamycin). After transoral intubation, a modified Gluck-Sörenson incision (figure left) is utilized, extending over the lateral border of the sternocleidomastoid muscles and approximately 1.5 cm proximal of the manubrium sterni. Through this incision a combination of the laryngectomy with a uni- or bilateral neck dissection is easily accomplished.

The U-shaped skin and platysma flap is then dissected until the hyoid bone is reached. The cranial extension of the surgical field is the region of the submandibular glands, the lateral extension the carotid arteries and internal jugular veins. The omohyoid muscles are cut a few centimeters lateral to the thyroid cartilage, and the sternohyoid and sternothyroid muscles are undermined and severed as well. This ensures proper soft tissue coverage of the specimen. This is also realized by leaving the homolateral thyroid lobe including the isthmus on the specimen. The contralateral lobe of the gland is preserved with its arterial and venous blood supply. This lobe is dissected away from its attachments to the thyroid cartilage and trachea. Both superior laryngeal arteries and veins are ligated and cut, as well as the laryngeal nerves. The hyoid bone is now dissected from its attachments to the tongue musculature, starting with the greater cornu. Care should be taken at this stage to preserve the lingual arteries and the hypoglossal nerves. The dissection is deepened until the pharyngeal mucosa, i.e. the vallecula is reached. The pharyngeal constrictor muscles are cut just ventral to the posterior thyroid cartilage rim.

The piriform sinus is opened contralateral to the tumor, and with a palpating finger inside the pharynx, the incision is extended towards the vallecula with a pair of scissors. The specimen can be rotated and the tumor can be seen directly.

Under direct vision of the tumor the dissection can be continued to the homolateral side and the larynx is pulled downwards with the postcricoid and hypopharyngeal mucosa clearly visible. Depending on the extension of the tumor more or less of the mucosa in the post-cricoid area is preserved and the specimen can be removed. In the figure to the right the situation after removal of larynx is shown.

After careful haemostasis and rinsing with saline or distilled water, the operation field is re-draped. The trachea is sutured in position with vicryl 1-0. By suturing the caudal skin flap as far back as possible to the posterior tracheal cartilage, the tracheal lumen remains open due to the tension in the skin (figure left). Another (preferred) option is to create a separate opening in the skin for the formation of the stoma (see page 'Primary tonicity control of the PE-segment'). This can be done if the skin incision at the beginning of the surgical procedure is positioned more cranially (Gluck-Sörenson incision). If the sternal heads of the sternocleidomastoid muscle are protruding too much, it is advisable to incise them (see under Tracheostoma construction), in order to form a flatter and easier to occlude stoma. This later also facilitates the application of a speech valve and/or heat and moisture exchanger.

At this stage, the tension of the cricopharyngeus muscle , also and preferably referred to as the upper esophageal sphincter, should be judged by palpation with the index finger (figure right). When hypertonicity of this muscle is observed, indicated by tension of the muscle around the finger, a longitudinal myotomy has to be performed. This procedure is not to be confused with a (primary) myotomy of the constrictor pharyngeus muscle, which is not routinely used by us, since primary unilateral neurectomy of the pharyngeal plexus is a good method to prevent hypertonicity of this muscle group (see figure on page 'Primary tonicity control of the PE-segment') 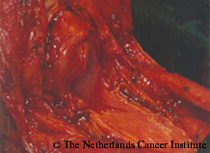